I memorized the book of Jonah while canoeing the mighty Mackenzie river the summer of 2001. I managed to photocopy the 3 pages it was on in my Bible and put the sheets face out in my See 20L dry bag so that I could read and recite and check while canoeing. Things went pretty quick from then on. I must thank Ty for checking a couple times for me as I recited the first couple chapters. (Caw! Caw!)

I chose Jonah because it is full of Adventure, Rebellion, Mystique, Poetic Prayer, Revenge, Gambling, Mercy, Wildlife, Royal Edicts, and Great Lessons about me. Plus it was only 48 verses in 4 chapters. I like the Old Testament where God is trying to show how merciful He is when everyone thinks He should be an Authoritarian God. He is “gracious and compassionate, slow to anger and abundant in lovingkindness, and one who relents concerning calamity.” I preached a sermon on Jonah a couple times since then. Really a good lesson on the degree God goes to to save his people and how truly reluctant we are to love those people God wishes to save. 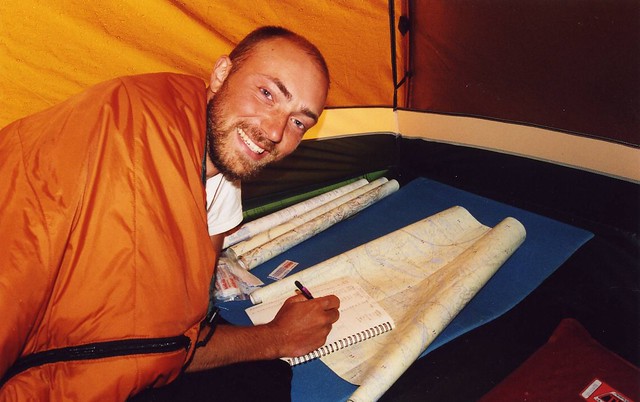 So here is Jonah (New American Standard) as I memorized and wrote it out on the evening of Aug 6, 2001 in my tent next to Kris who would not cross check it for me.

Chapter 1: The word of the Lord came to Jonah, the son of Amittai, saying “Arise, go to Nineveh the great city and cry against it for their wickedness has come up before me.” But Jonah rose up to flee to Tarshish from the presence of the Lord, so he went down to Joppa, found a ship which was going to Tarshish, paid the fare and went down into it to go with them to Tarshish from the presence of the Lord. The Lord hurled a great wind on the sea and there was a great storm on the sea so that the ship was about to break up. Then the sailors became afraid and every man cried to his god. And they threw the cargo which was in the ship into the sea to lighten it for them. But Jonah had gone below into the hold of the ship, lain down and fallen sound asleep. So the captain approached him and said “How is it that you are sleeping? Get up! Call on your God, perhaps your God will be concerned about us so that we will not perish.” Each man said to his mate “Come let us cast lots so we may learn on whose account this calamity has struck us.” So they cast lots and the lot fell on Jonah. They said to him “Tell us, now! On whose account has this calamity struck us? And what is your occupation? Where do you come from? What is your country? From what people are you?” He said to them “I am a Hebrew and I fear the Lord God of Heaven who made the sea and the dry land.” Then the men became extremely frightened and they said to him “How could you do this?” for the men knew that he was fleeing from the presence of the Lord. So they said to him “What should we do to you that the sea may become calm for us?” For the sea was becoming increasingly stormy against them. He said to them “Pick me up and throw me into the sea, then the sea will become calm for you, for I know that on account of me this great storm has come upon you.” However the men rowed desperately to return to land, but they could not for the sea was becoming even stormier against them. Then the men called on the Lord and said “We earnestly pray, O Lord, do not let us perish on account of this man’s life, and do not put innocent blood on us, for You, O Lord, have done as You have pleased.” So they picked up Jonah, threw him into the sea and the sea stopped its raging. Then the men feared the Lord greatly and they offered a sacrifice to the Lord and made vows. And the Lord appointed a great fish to swallow Jonah and Jonah was in the stomach of the fish three days and three nights.

Chapter 2: Then Jonah prayed to the Lord his God from the stomach of the fish. And he said
“I called out of my distress to the Lord
And He answered me
I cried for help from the depth of Sheol
You heard my voice
For you had cast me into the deep
Into the heart of the seas
And the current engulfed me
All Your breakers and billows passed over me
So I said ‘I have been expelled from Your sight
Nevertheless I will look again toward Your holy temple’
Water encompassed me to the point of death
The great deep engulfed me
Weeds were wrapped around my head
I descended to the roots of the mountains
And the earth with its bars was around me forever
But You have brought up my life from the pit, O Lord my God
While I was fainting away
I remembered the Lord
And my prayer came to You
Into your Holy Temple
Those who regard vain idols
Forsake their faithfulness
But I will sacrifice to the Lord
With the voice of thanksgiving
That which I have vowed I will pay
Salvation is from the Lord” Then the Lord commanded the fish and it vomited Jonah up onto the dry land.

Chapter 3: Now the word of the Lord came to Jonah the second time saying “Arise, go to Nineveh the great city and proclaim to it the proclamation which I am going to tell you.” So Jonah arose and went to Nineveh according to the word of the Lord. Now Nineveh was an exceedingly great city, a three days walk. Then Jonah began to go through the city, one days walk and he cried out and said “Yet forty days and Nineveh will be overthrown.” Then the people of Nineveh believed in God and they called a fast and put on sackcloth from the greatest to the least of them. When the word reached the king of Nineveh, he arose from his throne, laid aside his robe from him, covered himself with sackcloth and sat on the ashes. He issued a proclamation and it said “In Nineveh, by the decree of the king and his nobles, do not let man, beast, herd or flock taste a thing. Do not let them eat or drink water. But both man and beast but be covered with sackcloth and let each man call on God that each may turn from his wicked way and from the violence which is in his hands. Who knows? Perhaps God will turn and relent and withdraw His burning anger so that we will not perish.” When God saw their deeds, that they turned from their wicked way, God relented concerning the calamity which he had declared he would bring upon them. And He did not do it.

Chapter 4: But this greatly displeased Jonah and he became angry. He prayed to the Lord and he said “Please Lord, was not this what I said while I was still in my own country? Therefore in order to forestall this I fled to Tarshish, for I knew that You are a gracious and compassionate God, slow to anger and abundant in lovingkindness, and one who relents concerning calamity. Therefore now, O Lord, please take my life from me for death is better to me than life.” The Lord said “Do you have good reason to be angry?” Then Jonah went out from the city and sat east of it. There he made a shelter for himself and he sat under it in the shade until he could see what would happen in the city. But the Lord God appointed a plant and it grew up over Jonah to be a shade over his had to deliver him from his discomfort. And Jonah was extremely happy about the plant. But God appointed a worm when dawn came the next day and it attacked the plant and it withered. When the sun came up God appointed a scorching east wind and the sun beat down on Jonah’s head so that he became faint and he cried with all his soul to die saying “death is better to me than life.” Then God said to Jonah “Do you have good reason to be angry about the plant?” and he said “I have good reason to be angry, even to death.” Then the Lord said “You had compassion on the plant for which you did not work and which you did not cause to grow, which came up over night and perished over night. Should I not have compassion on Nineveh the great city in which there are more than 120,000 persons who do not know the difference between their right and left hand, as well as many animals?”